Sire lines  are one of the basic features defining a breed. The sire line is the paternal line of descent behind existing stud dogs in the breed; it can be found by tracing the far left (blue) line of a pedigree written out as a family tree as pictured here.   The “Y” chromosomes in the breed genepool all come from this line.  Questions to ask when studying a breed include: 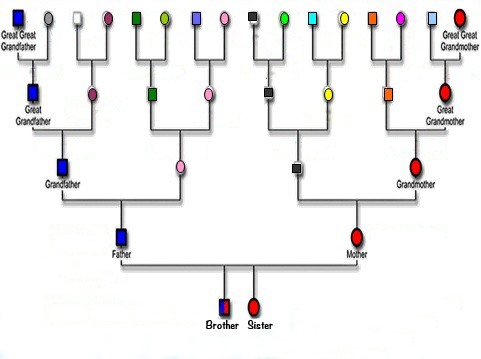 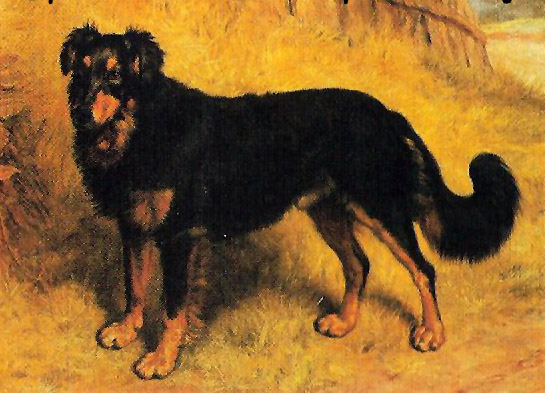 How Many E.S. Sire Lines Exist?

Information from pedigrees suggests that the English Shepherd breed has about 24 different sire lines. Is this accurate? Help us find out!
Sire Line Survey 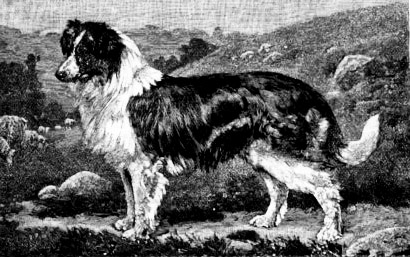 How Many Dogs From Each Line?

Because there are several registries for the breed, and not all dogs are registered, it is not possible to get a precise count of how many dogs there are in different lines.  Some lines appear to have very few remaining descendants and may be in danger of disappearing. 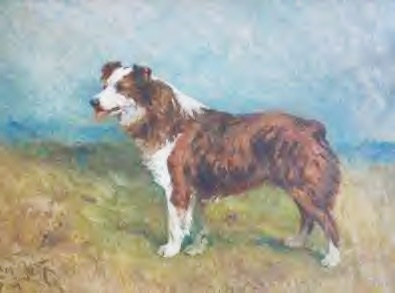 Are These Lines Genetically Distinct?

The million dollar question!  We know that English Shepherds vary in appearance and that selection for particular traits varies among breeders.  We also know that the breed experienced a population bottleneck. The extent of the genetic loss from that bottleneck has not been measured.

Those two facts mean that the genes in a breed’s gene pool change from one generation to the next. Some genes are lost because the dogs carrying them never reproduce; some genes become more common because dogs carrying them produce more offspring than other dogs.  As a result, genetic diversity in breeds diminishes over time. The bottomline is, the effective population size may be shrinking despite growing numbers of dogs in the breed. 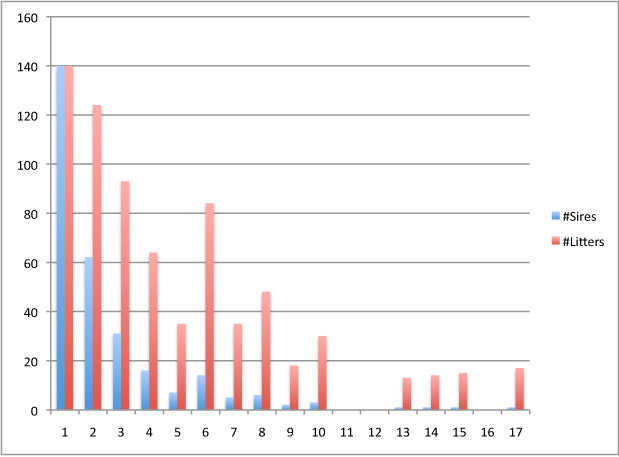 “Popular sires” are dogs that produce a lot of offspring relative to other dogs in their generation; they swamp the gene pool.  Breeds are particularly vulnerable to the impact of popular sires when the overall population numbers are low, as they were for English Shepherds in the 1980s – early 2000s.  When there aren’t very many breeding dogs, it doesn’t take a tremendous number of litters from one dog to skew the gene pool: if there are 10 stud dogs in a breed, and 9 of them each sire 1 litter while 1 dog sires 11 litters, the offspring of the dog with 11 litters will make up more than half of the next generation.  As generations go by, the genes from those dogs become ever more prevalent throughout the breed. It important to note that 11 litters as the lifetime production from one stud dog, is probably less than one litter per year — so it doesn’t take much to tip the balance in rare breeds.

The chart above shows the number of litters (red bars) and the number stud dogs (blue) that produced them.  The x-axis is number of litters per dog (the range is 1 – 17).  The red and blue bars are the same height for the dogs that produced 1 litter (140 dogs produced 140 litters).  When the dogs produced 2 litters, the red bar is twice the height of the blue bar.  And so on.  This chart reflects the litters produced per English Shepherd stud dog from 2005 – 2015.  In total, 290 dogs (blue) produced 730 litters (red); over two-thirds of the dogs (202) sired only one or two litters whereas a handful of dogs produced 10 or more litters.

The Pox of Popular Sires

Your donation will be used to fund research and education to help ensure a healthy future for English Shepherds.
Donate